Finally we had the last mare pregnant for this year. We missed some time while we was trying with frozen semen from a stallion that had unknown fertility frozen. Then we changed stallion to Canterbury she was pregnant after the first insemination as she always does. 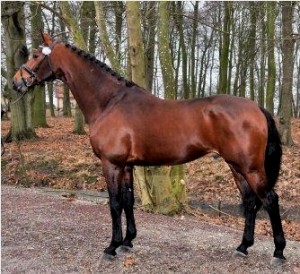 “Flora” as we call her at home have that gigantic dressagepedigree (Fidertanz – Rohdiamant – Donnerhall – Pik Bube) and we thought that the combination with a stallion with Holsteinerblood would be an interesting combination. Canterbury was not a coincidence; he has already proved that he makes not only good jumpinghorses but also very good dressagehorses. He have the well known Branderburger as motherfater like the famous stallion Quaterback.

“Flora” has 3 offspring and she has put a lot of value to her babies, just as we want from a very good broodmare. All of them are so lookalike both in type, gaits and temper. They looks like Flora-minis. We are so happy for her.